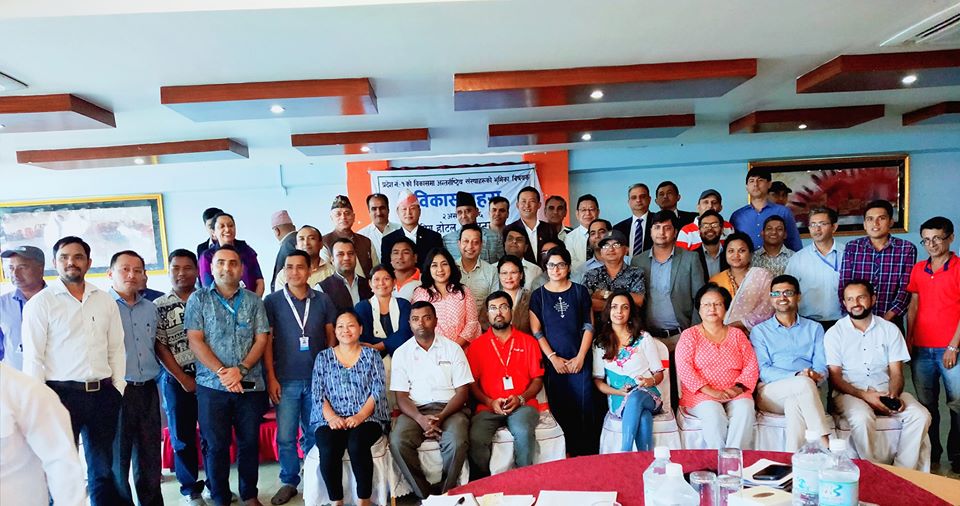 The Ministry of Social Development of Province 1 in coordination with AIN had organized a half Day Development Dialogue. In the context of decentralization under the federal system in Nepal, this is the fifth Development Dialogue that AIN has been facilitating as an effort to ensure effective discussion and building clear understanding of AIN with Provincial Government entities. The Chief Minister of Social Development Hon. Sherdhan Rai had graced the event as the Chief Guest and Hon. Minister Jeevan Ghimire had chaired the event. Vice Chair of Province 1 Planning Commission Hon. Subodh Pyakurel along with Ministers, Secretaries and Under Secretaries from various Ministries were present as well. AIN SC Member Suraj Sigdel, Country Director of CBM, Reshma Shrestha, AIN Program Coordinator and Policy Analyst Shiva Paudel had attended the event representing AIN.   The main objective of this dialogue was to interact with the government officials to establish a positive and productive relationship between them and AIN members, to improve collaboration and coordination with the Provincial Government in the projects and interventions across the Province by sharing information and identifying practical mechanisms for regular contact and discussion; and to provide basic information about AIN, its principles, objectives, INGOs operational procedures and the work INGOs do through its members in Province 1.

Get In Touch With Us